RPG Classes Quiz & What RPG Class Am I?

If we ask you which type of games are your favorite then what would you say: Real-time strategy, Shooters, Action-adventure, Puzzlers, or some other? We have seen that “Role-playing games (RPG)” have attracted most of the gamers and everyone has been enjoying the excitement of playing a role in the game as everything feels so real. Don’t you feel overwhelmed and privileged when you can observe the powers and abilities that the game gives you? We often began to think that we own them all.

Now, that you are on the point where we wanted you to be then why not try the RPG Class Quiz to check out what RPG class are you? This quiz would aid you in becoming a better player in many ways. You would know which RPG class are you most like, can pick yours easily while playing games, would be able to trace your strong areas when it comes to role-playing games, etc. Now that you are ready to enter the world of RPG Class Trivia Quiz so why not dive deeper and skim through the best classes that exist in the gaming galaxy. Let’s Roll and find out your best RPG class…

We have picked four extraordinary classes of role-playing games that would treat your gaming nerves in the best way according to your Gamer Type. 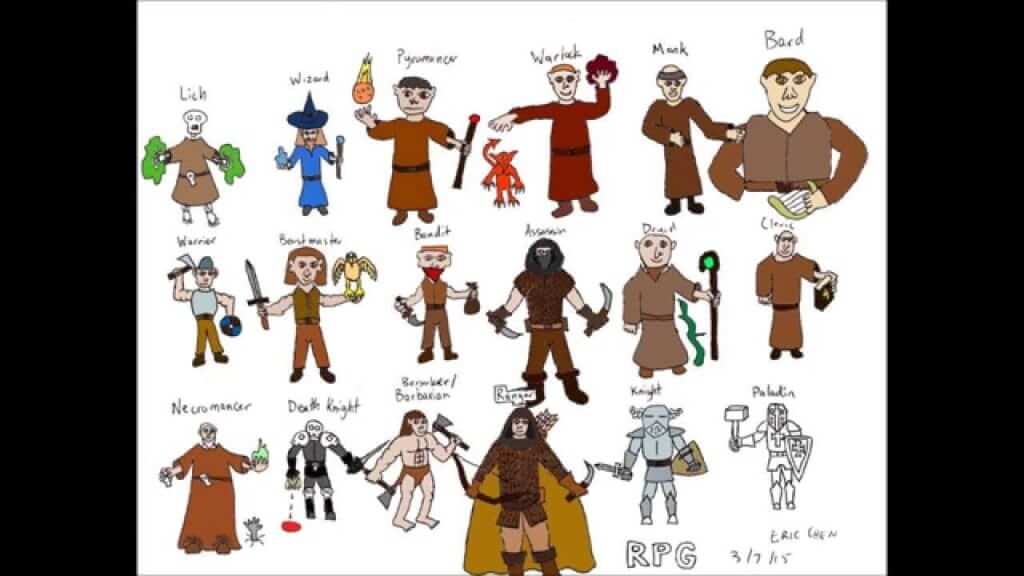 Well, the fighter class is definitely the most favorite class of every gamer because it gives everyone energy, extreme powers, a wide range of weapons to choose from, muscular body, aggression, rage, etc. Who would not be attracted to these traits? Most of the games have this class and this is why the fighter class reaches the top spot in our list.

What Powers Does The Fighter Class Possess?

The powers of this class make you feel superior. Some of its best traits are:

You’d find the fighter class in every game but the names might be:

The cleric class might sound boring to many but it is a fact that this class can give you a combination of the most amazing powers and traits in just one class. RPG is all about feeling the best and the cleric class makes this happen. They not only have their own powers but their religious past makes them stronger. The clerics usually fight for the sake of wellness and the greater good. Moreover, their rank allows them supremacy as well. The magical powers, disciplines, mental capabilities, and other attributes are perfect when you are willing to play calmly and as a strategist.

What Powers Does The Cleric Class Possess?

Cleric class is vital in games because of its infinite powers.

The cleric class is commonly named:

The wizard class also steals the glance of gamers and it is mostly because they are loaded with magic. Not only they are helpful in solo games but even when playing in a team, one wizard is a must. They are naturally weak in combating; their slender bodies aren’t designed for physical fighting, instead, it is better if they maintain space and fight while being away from the danger zone.

It is a fact that this class is of great importance as it can manipulate the elements of nature. In some games, you can even create new spells or find the ones with more power by passing the levels. Wizards are also titled as Necromancers in various games but remember, Necromancers are negative in nature and employ their powers for inconsiderate purposes.

What Powers Does The Wizard Class Possess?

The Wizard class has many names, some of the most common ones are:

If you believe that fighting throughout the course is your strategy in the role-playing games then the barbarian class is what you should pick. This class contains characters who wear leather skin clothes and portrays the early years of mankind in which the mind works irrationally and the only thing you know is: fight to survive. It’s true that in this class you have immense strength but the motive are "Death and Destruction".

What Powers Does The Barbarian Class Possess?

The Barbarian class is also named as:

WHICH RPG CLASS CHARACTER ARE YOU?

What are you waiting for? Take the RPG Class Test and get to know which RPG class fits you well. You have only one chance to know your hidden strengths.