Which DSMP Youtuber Are You? – Minecraft Dream SMP Quiz

Thinking why is everybody going crazy for the Minecraft Dream SMP? The game has been incredibly notorious in just a year as millions of gamers are playing and watching Minecraft servers around the globe. The reason of DSMP's fame is its creator who is "Dream" the person who has more than 30 million followers on Youtube and Twitter. We thought why not excite your spirits with the amazing Dream SMP Quiz that would let you know which DSMP member are you?

Every gamer must know what does SMP stands for? Well, it stands for Survival Multiplayer because in the game players have the opportunity to design, dismantle, strengthen, explore, show off their abilities and for all this, they are furnished with different tools and other things that allow everyone to bring out the real gamer inside them! Ready to discover some more facts about Dream SMP Minecraft Server and Minecraft Mobs? Then let’s roll!!!

Clay aka Dream is the most famous member of the Dream SMP game and has the most followers on social media. Everyone loves to watch his game on various live streaming platforms while he has his very own server of Dream SMP. He has really accomplished a lot at such young age as he is only 22 years old.

The character of Dream seems like a white and green blob that has a big smile on its face. Dream is a confident, persistent, and diligent character who has built-in skills of leadership and plans out the things actively to work out with the situations. A dangerous fact about dream is that he loves power and if you take it from him then he acts violently. Some people believe that Dream wishes to be the God in the game.

Dream owns some incredible items in the game like his Axe, although he lost it to Tommy, Sword that brings the ability of loot, fire, and is unbreakable. Moreover, he possessed a book of Necromancy which he read and burnt in fear of loot. As a result, we can say that Dream is an interesting character.

The creator of GeorgeNotFound is George Lore. The character is basically a lego wearing sunglasses and a casual T-shirt and jeans. The personality of George is quite weird (in the game) because he doesn’t have any aim or goal and just obeys Dream; Whereas, his only mission is to spread disruption and havoc in the server by committing crimes and doing non-sensical things.

He doesn’t care what he has and what he might lose. For instance, he was the king in the game but lost the position due to his immature activities and chaotic mind as he kills, loot, and does all the immoral things without any cause or reason.

George owns a Lore, Holy spoon (a shovel in the game), DreamXD’s Netherite Set that has a complete range of tools, and once owned the Dream’s Shield which he lost to Tommy. We can say that he is a powerful character but he doesn’t realize it himself.

The brainy genius behind the character of Awesamdude is Sam who has created his character with numerous small gems that are of different colours. If we try to find which Dream SMP member is your soulmate? And what if Dream SMP Quiz claims that it’s Awesamdude so would be happy or sad? Let’s not rush and first look into the character….

Gamers have observed changes in Awesamdude’s personality, as he has now become more absurd and just believes in doing good to others no matter how he does it and what the price is. He has been made the warden of Pandora’s vault and tries his best to save it from all with the help of Warden’s Will (a sword), Warden’s Hammer, Warden’s Bow, Warden’s Trident, Warden’s Helm, and Vest. All these items are gifted to him by Dream.

By the way, Dream loves Zelda as well. If you too, what about checking our another quiz: Which Zelda Character Are You?

It’s easier to call him Tommy as most of the players do. The character of Tommy is quite neutral as he was the Vice President of L’Manberg and one of the founders of Pogtopia. Tommy was the one who incarcerated Dream in Pandora’s Vault to gain control of server so that he could end all the conflicts and chaos; however, the situations ended differently.

Tommy is a handsome-looking character wearing fashionable clothes and most of the gamers believe that he is a bit arrogant and feels proud of his abilities and items like Knife, Snapap’s Schlong, etc. On the other hand, he is impassioned and thoughtful and never lets anyone hurt people around him especially his pet. We think Tommy can be a perfect Dream SMP boyfriend for you!

Tubbo seems like a veteran character with long blonde hair, a green shirt, and blue pants. He always has his best friend Tommy by his side and both often fight to protect each other. Tubbo is loyal, creative, and always puts his duties before other things. He is always propitious and helps all other characters on the server. Most of all, Tubbo is the best builder in the game so he is needed by everyone.

This character owns the most precious things in the game like the first Stal Disc, Mellohi, Your Tommy (a compass in the game), Diamantspitzhacke (a pickaxe), Ban O Bees (Tubbo’s axe), Checkmate (Tubbo’s sword). Now you may know how impressive is Tubbo in the game and you might be powerful like Tubbo but in order to know who are you in the DSMP then take your Dream SMP Life Quiz.

What does SMP mean for Dream?

SMP represents "survival multiplayer" which is a kind of Minecraft server, it was created by a very famous Minecraft YouTuber who call himself "Dream". Dream has invited and welcomed other famous Twitch streamers and YouTubers including TommyInnit, Tubbo, GeorgeNotFound, Punz, and more to join "Dream SMP".

Main story is concluded as Dream put behind the bars. But all fans are waiting a new start or continue and dream shared some signals about that, fingers crossed.

Why is Dream SMP so popular?

Because it has a real story and it is including famous Twitch Streamers and Youtubers. For some of the Minecraft fans, following Dream SMP was watching an addicting Netflix serie.

Can you join DSMP?

You can now click "Join Server" to use it.

What is DreamWasTaken real name?

His real name is "Clay".

How do I join the Dream SMP server?

Getting on a Minecraft SMP server. Release Minecraft. Go to the Minecraft Multiplayer menu. Click the "Add Server" button. Type "SMP Server" in the text box. Enter the IP address of the server: dreamsmp.net. Click the "Done" button. Double-click the listing to sign up with the server.

How old is Technoblade?

How old do you have to be to join the Dream SMP?

How old is GeorgeNotFound?

Drista is the sister of Dream.

DREAM SMP QUIZ - WHICH DSMP MEMBER ARE YOU? 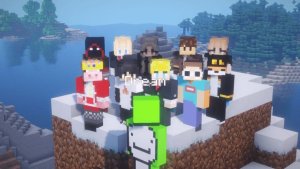 We know that you are creative, intelligent, and aspiring like the creators and members of Dream SMP server but the only way to find out who do you resemble in Dream SMP is the Dream SMP Quiz!!!